Baharestan carpet a unique work of art that was cut into pieces by the Arabs!!

Baharestan carpet can undoubtedly be introduced as one of the unique artworks of Iranians, which unfortunately has been destroyed. Baharestan hand-woven carpet, which was left over from the Sassanid period and was also known as Bahar Khosro, Baharsari and Mehstan, because of its special characteristics, can be introduced as one of the miracles of Iranian carpet weaving, which during the Arab attack on Iran was broken into pieces!

In this article about the Farahan carpet, we are going to first examine the history and antiquity of the Baharestan carpet, and after introducing it, we will try to introduce you to the main features and characteristics of this special work of art. If you are one of the lovers of handwoven carpets and the art of carpet weaving, we recommend that you stay with us until the end of this article.

Why was Baharestan carpet woven? 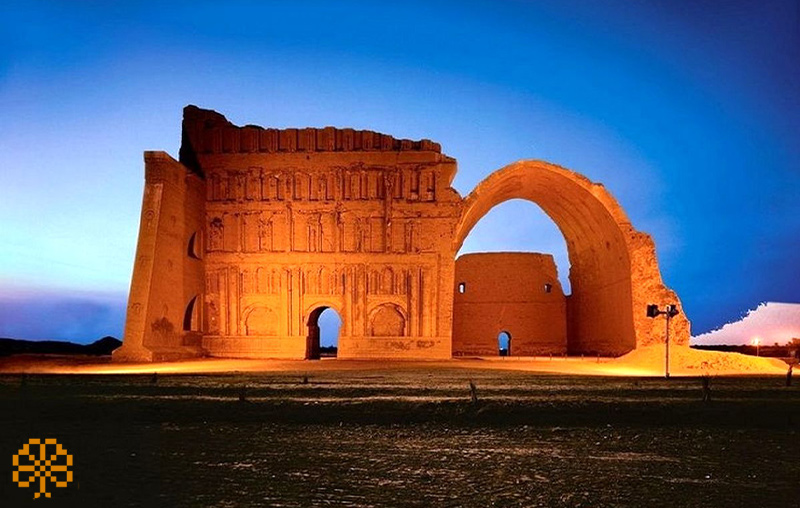 To put it simply, the Baharestan carpet is a huge hand-woven carpet, the exact dimensions of which are not known, and various sizes have been stated for it in history, the most probable of which is 140 meters long and 27 meters wide.

This hand-woven carpet was woven during the reign of Khosrow Parvez, the great Sassanid king who had many conquests and bravery and achieved many military victories during his reign and was able to expand the territory of Iran during his reign, but on the other hand Because of his partying personality, he could not maintain his rule and was killed by those around him.

Anushirvan, who was the first Sassanid king, founded a city in the west of Iran called Tispon, which is currently located in Iraq. Anushirvan chose the city of Tispon, which was made up of seven nearby cities, as the capital of the Iranians during the Sassanid period, and built huge palaces there, one of the largest of which was the Kasari White Palace, the grandeur of which was somewhat Ferdowsi, a famous poet of Iran, says that the construction time of this palace is more than seven years.

When Khosrow Parviz came to the kingdom, he decided to fill these palaces with special equipment and devices, one of which was the weaving of the Baharestan carpet, which was intended to be spread in the bar room of Kasri Palace.

In fact, Khosrow Parviz was looking for a special and special carpet that could remind him of spring and the gardens of heaven in the winter and cold season, so that while drinking wine, he would be happy with spring in some way. For this reason, Baharestan carpet is also called winter carpet. 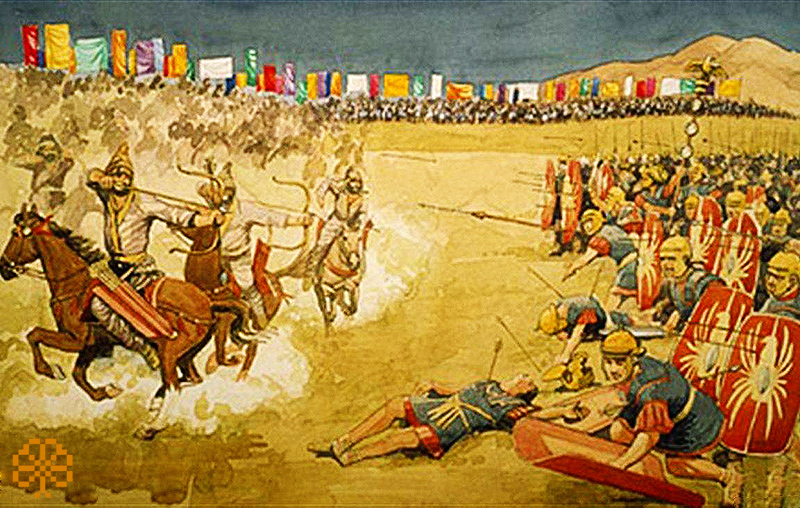 It is definitely not possible to talk about the specifics and characteristics of a carpet like Baharstan, which is nearly 1500 years old, but here we tried to state the things that are mostly mentioned in historical sources. Is:

The fibers used in Baharestan carpets are more than silk, wool, glabton, gold and silver, which have been tried to be given a special beauty by using thousands of inlaid jewels.

It is interesting to know that for the texture of this special work of art, nearly 24 masters have spent 8 years so that they can turn it into a special work by using many precious stones such as gold and silver and jewels such as emeralds and pearls.

At the beginning, we must say that even now there are carpets with jewels of this shape in the world, which are kept in museums, and the purpose of weaving carpets with these characteristics is not for public use, which needs to be easily walked on. In fact, the most probable thing is that there were ways for people to pass through these carpets and in fact, they tried to use rubies and jewels only in certain places.

As we said, there are no specific and exact dimensions for this Baharestan carpet, but the subject that is mentioned in all historical books is the greatness of this carpet.

What may cause questions for people here is that a carpet with these dimensions and raw materials of this shape weighs more than 2 tons, which will be very difficult and difficult to transport. How do they weave it and move it?

Carpet experts believe that this carpet was first woven on a rug, and after it was finished, it was spread in the bar hall of Khosrow Parviz, and then the jewels, rubies, and gold were placed separately in their place. They are connected to each other in some way, so that when completed, the carpet looks like a single fabric.

As we mentioned, the design and map of Baharsari carpet is taken from Iranian gardens where small streams of water flow that are similar to streams of water. These streams are decorated with transparent and colorless jewels, which somehow evokes the effect of clear and transparent water in the viewer’s mind. In addition to these jewels, the use of pearl seeds on the bottom of these streams has made the sands of the streams show their beauty.

To make the streams more natural, designs of people on foot were also woven next to them, which were inside the vegetable gardens, which were designed with green colored gemstones, which could show the lawn in the best way. to give This issue also doubled the beauty of this special carpet.

It is interesting to know that in the designed gardens, trees were used that have thorny stems and the branches of the trees are also symbolic. The flowers, fruits and buds of this carpet also gave a special effect to these gardens.

Also, the borders of the Baharestan carpet are wide and specially designed, and its decoration is like gardens. In a number of gardens, gold ingots and plates in the form of soil have covered the surface of the garden. 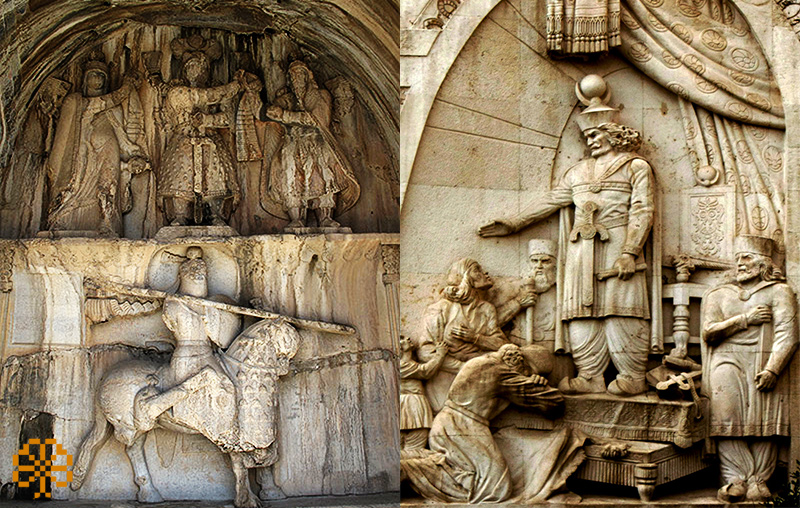 Maybe you have been asked what happened to the end and fate of this unique handmade carpet?

According to the conducted studies, two fates have been stated for the Baharestan carpet: the first theory is that when Khosrow Parviz, the Sassanid king, was defeated by Heraclius, the Roman emperor, this carpet fell into the hands of the victorious troops, which is less accepted by historians and experts than the second one. be

The second theory is that according to the great war that happened in 426 between the Muslim Arabs and the Iranians, with the victory of the Muslim army under the command of Saad over the Sassanid king, all the gold, wire, jewels and precious objects of the Iranians that the Arab army had so far captured were not facing each other, it was recorded by them, one of which was Farsh Baharestan.

Since the dimensions of this special carpet were very large, the Muslims could not reach a conclusion about it at first, and they took it to Umar, the Caliph of the Muslims in Medina, and he decided to divide it into small pieces and divide it between the Muhajirin and the Ansar. slow

“Mir Khwand, the author of Ruza al-Safa” states that Umar cut the carpet into pieces and divided it equally between the Muhajirin and the Ansar, and it fell into the hands of Hazrat Ali (a.s.) with the size of his palm. sold it for 8,000 dirhams and gave it away, and the other pieces were sold to the merchants who came to Madinah.

In this article, we tried to tell you all the necessary points about the Baharestan carpet, or the Bahar Khosro and Baharsari carpets, which are among the oldest hand-woven carpets, and we should definitely not expect all of them to be correct, because they are works of art and historical material. With this high age, it is generally associated with many distortions among historians, but we tried to collect the most authentic information for you. 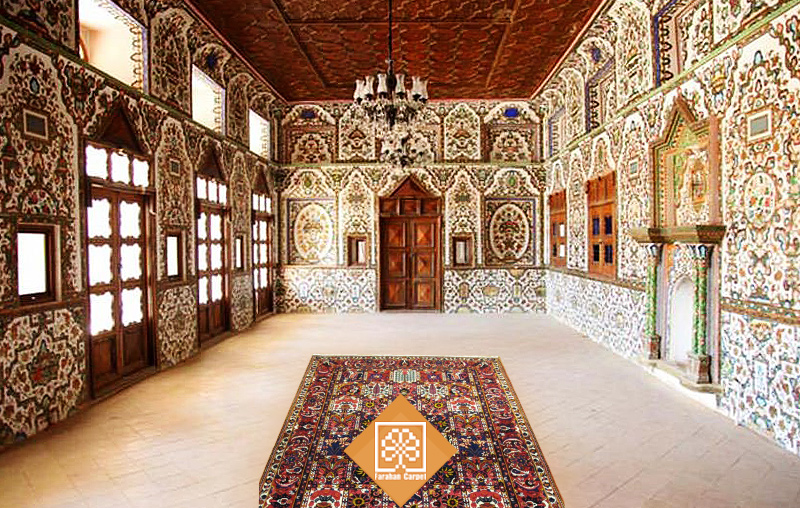 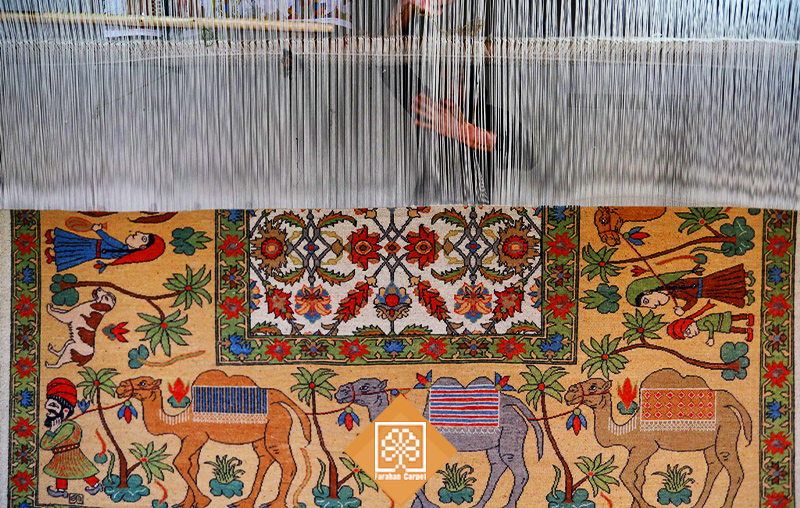 Handmade carpet pile and Comparison of cotton, wool and silk 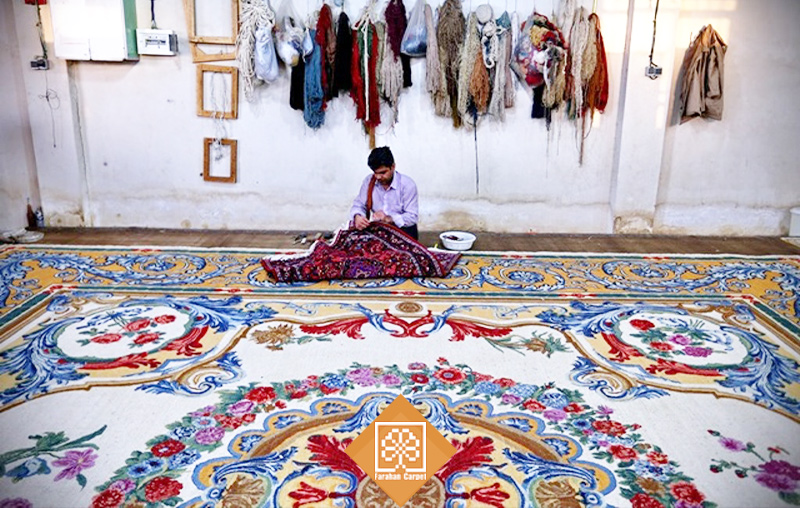 Traditional hand-woven carpet and tips for buying it